Peter of the former Psquare was payed to perform in Sweden on the above mentioned date at the Africa Festival Stockholm Sweden. A total of 250.000 Sek was the Amount agreed on for his performance. The amount of 150.000 Sek was transfered to his Euro Tour manager’s company Accout (Denshaq Production)based in Belgium. An additional 50.000 Sek which was transferred by Money Gram day before the Event and before we had the shocking news that the Artist had missed his flight which turned out not to be true.

Hearing from the Artist himself on a Watsapp live video chat and in a written msg to us by the Artist’s manager in Africa, the reason for not being able to travel was that the Artist and his crew had not been issued visa for the reason we did not get.But according to his EuroTour manager it was because they delayed handing in the documents in time as the regulations of any embassy state a particular time for handing in and also issuing the visa. We should have been careful after that first lie told by his Euro Tour Manager that they had just missed their flight . We were even offering to pay for flights that were departing that same day late night.Actually the Artist was not happy about the lie that had been told by his won Euro tour manager.

Who submits a  passport to the Embassy a few Days before travel?? The  Euro tour manager assured us always that everything was okey even in the same Week of the event. The artist was denied visa early in the morning day before the event day But the Euro Tour manager told us late evening and during all day he was busy rushing us to pay the last payment so as to buy the Artist and his crew air tickets to fly to Europe. It might Also be that the the Artists management in Africa did not inform him earlier.That was very disturbing and left us with lots of doubts of how to trust the whole management.

After all that mess, We were promised by the Artist himself that if we rescheduled the event he would fly in 7 days prior the event to win the trust  back from angry and disappointed fans and also do some adverts. He would pay Hotel for his crew (8 persons)and also upkeep during his stay in Sweden that period of time. We believed and respected the Artit’s promise. They also assured us to keep close contact feedbacks but that never happened. ( on a video chat with us).And all those promises were put in the adjusted contract for the reschedule agreed upon and signed by the Artist’s Euro our manager as you will see in the attached documents.

The truth is it was very hard to get in touch with them and to get feed backs of what was going on regarding the visa which had been promised to be issued on the 23rd of May 2018 according to the artist’s manager in Africa who even comfirmed they had documentation that stated that their visa would be issued on the above named date. A week had already gone by and no communication from neither the Artist’s management in Africa nor his Euro Tour manager. The Euro tour manager himself had hardship getting in contact in person to speak to the Artist himself or his manager in Africa for feedbacks. Actually the Euro tour manager told us that the Artist and his manager are to blame for not handing in their documents on time and that the Artist’s manager in Africa  was very passive and never followed up cases as should be and that he had to do all that by himself.(a watsapp conversation on that is available).We got so disturbed and So we decided to emphasize on a refund. Of which the Euro Tour manager informed it would not be possible for the Artist to do and that the only way was to have him in Europe so as to inform him about our refund request and that was the plan the euro Tour manager Charles Osagie Denshaq Productions said had (a watsapp conversation on that is available)

As days went by the Euro tour manager continued to persuade us for a show saying he knew very well that the Artist can never refund us so it was better we did a show and recover what was lost. Even when we informed of how scarce and expensive the venues were in Sweden,and that the cancellation might affect he still would not consider to tell his artist to perfom.What we did not know was he was convincing us in all this for his own good. He did not want us to drop off the show.We became the victims of cirmstance trying to be considerate to most of his cooky sugestions when demanding our refund. We learn by mistakes! Being so good can cost and it did indeed.

The Artist now walks away with all funds payed to him without any performance and also leaves us all the damages,loses misstrust from fans etc Aman we thought was humble,had diginity,our own African representative worldwide.We all along believed he would do right soon after the event.It never happened ! We gave them a chance by communicating with the tour anger in the first two days after the event to see what we could come up with but the Tour manager had already a story built of how they to skip the refund. Statements like-Remember we made a collective decision,remember the Artist shook your hands and you both agreed on him not performing but take pictures with his fans and we call it quits,where were your fans,remember the Artist did his best to advertise.All that just made us understand who theEuro Tour manager was as person and prior to that we had been warned about him.As he was working well with us in the beginning we focused on that not on what was told by people because we know very well that most of us Africans dont wish the best for the others and would fabrikat stories to make others look bad. We normally try to avoid rummours.

The Artist’s Euro Tour manager kept on Formulating all kinds of stories just to skip refunding.That just took us by surprise and we were shocked.He even added that we can only sue his company not the Artist and that the Artist never signed any agreement with us.He confidently knows his company DENSHAQ PRODUCTION has zero income and therefore he loses nothing.At that point we knew we had lost and had to come out and let the fans know the truth and there is more to it but we shall keep that for diplomacy unless they come out with more lies then we shall not unlease the rest.The Artist even asked if we would consider a reschedule.Hell no! After costing us almost 400.000 sek for performance fees,loses .

The fans have already lost trust in him and we the organizers right from the first cancellation,second attempt then no performance and then what?? We said no we have done our best and here you are you have to just perform for the fans who are present and we call it quits or pay back the money and we would look into damages too right from the first cancellation.Peter seems very understanding and humble a man we just wished all this would not have gotten to this point where he showed the other side of him.He has a bad management. A proffs Event promotor would not choose to fabricate stories to make the hosts look bad and also lie to his own artist We are already informed  by the Tour manager that we shall never get a penny back.We are now making sure we pay back all the fans that payed for the show and keep us clean because we shall need those same fans for our future events. Those matter the most as for now. We have already made efforts paying back and are still on it.

This site uses Akismet to reduce spam. Learn how your comment data is processed.

PETER PSQUARE AND HIS EURO TOUR MANAGER CHARLES OSAGIE OF DENSHAQ PRODUCTION. PETER REFUSED TO PERFORM AND REFUSES TO REFUND 200.000 SEK. (20,000 EUR) A TOTAL OF APPROX. 400.000 SEK (40,000 EUR) IN DAMAGES AND PERFORMANCE FEES. THE CASE IS IN THE HANDS OF THE LAW IN SWEDEN AND BELGIUM WHERE HIS TOUR MANAGER DJ IKE / CHARLES OSAGIE / DENSHAQ PRODUCTION. BELGIUM RESIDES. THEY BELEVE THEY GOT AWAY WITH IT BUT THE WORLD IS WATCHING ESP THE DISAPPOINTED FANS THAT PAYED TO WATCH HIS PERFORMANCE. AND THE LAW IS AT WORK. 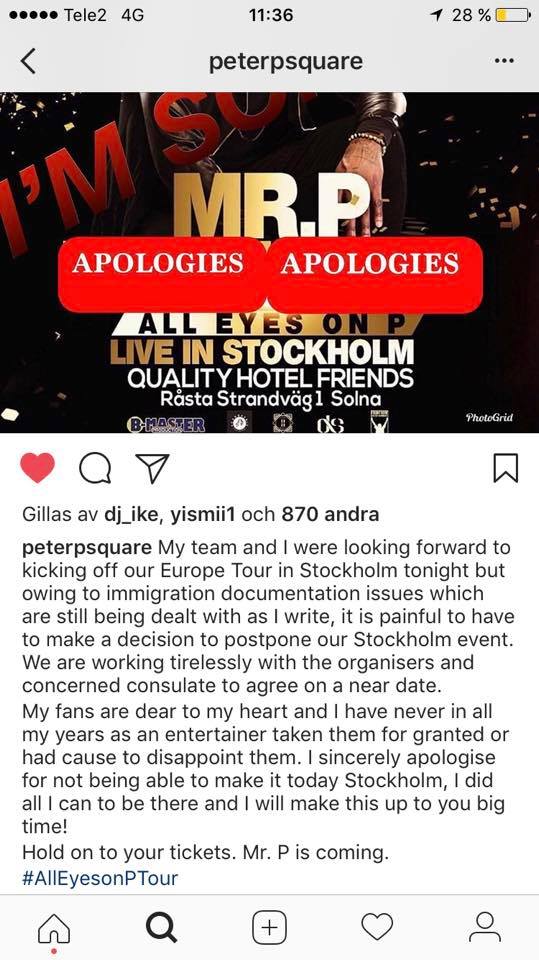 The man in the picture (down) is the so called Euro Tour Manager of Peter Psquare for 2018. He goes by he names DJ IKE Naija’s most wanted Dj. His real names are Charles Osagie and his company called DENSHAQ PRODUCTION based in Belgium.

He is the man we signed the contract with for Peter’s performance in Sweden. All payments we made were transferred to his Company account DEN SHAQ PRODUCTIONAND and of which payment was later transferred to Peter Psquare.

As you can also see in the attached Watsapp conversation stating how we are surprised by his behavior which changed just immediately after .He all of a sudden he refused to reply to our msgs and also calls from different members of our Team. Whoever succeeded in speaking to him after the event, he told them he was so busy and had no time for us.Basically indicating that we were useless to him then after ripping us. This is a guy who was so humble, responded to most calls and msgs from the beginning of the process of hosting his Artist MR.P Square. And because of that we considered alot of his requests since we realized he never wanted to let go the deal even when we had already given up after the first cancellation.

Billionaire Peter! I want my savings back